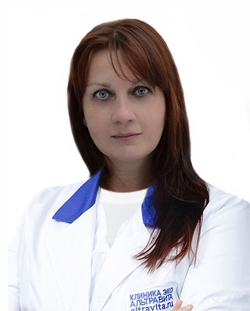 Graduated from Moscow Medical Academy of I. M. Sechenov.

Passed internship and postgraduate study on the basis of Scientific Center of Obstetrics, Gynecology and Perinatology.
Worked as Obstetrician-gynecologist, was engaged in conducting pregnancy by risk-group patients of miscarriage pregnancies. Her master’s thesis is devoted to studying of various aspects of application antagonists application and agonist of gonadotropin releasing hormone in the assisted reproductive treatment programs.

Conducted clinical researches of the antagonist of gonadotropin releasing hormone in department of IVF Research Center of Obstetrics, Gynecology and Perinatology of Russian Academy of Medical Science according to the international GCP standards (Good Clinical Practice). In 2004 represented results of her scientific work on the Congress of the European Society of Human Reproduction and Embryology (ESHRE) in Berlin.

Free consultation
Altravita Clinic occupies leading positions in the field of reproductive medicine, the treatment of female and male infertility, cytogenetic and molecular-genetic studies.
This site uses cookies. By continuing to use the site, you agree to this. Details about the processing of your data can be found in the privacy policy. I agree